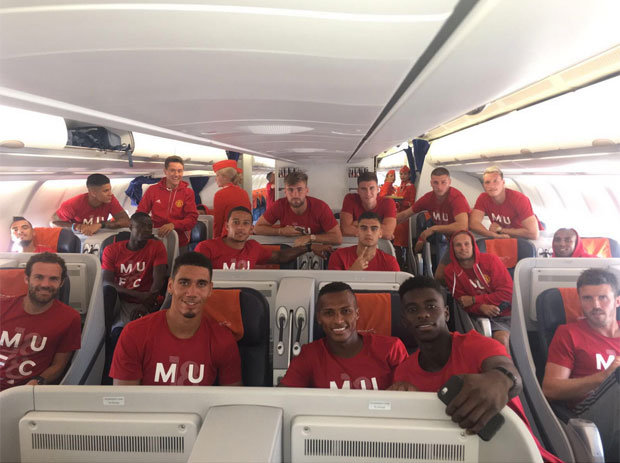 TFTTF doesn’t really take any notice of pre-season fixtures.  They rarely tell us anything of interest.  According to one manager friend of mine, that means I need a reality check.  I’m not so sure.  But, there is no way I could let United’s farcical trip to China pass by without comment

In the old days, you would get an idea of whether you were in the manager’s plans depending on what bib you were chucked in training.  Nowadays it is what plane you fly to Bejing on.  United, following a 4-1 defeat to Dortmund, flew from Shanghai to Bejing on two planes.  Yes, two planes.  Now that suggests that either they were very small planes or that Jose has some selling to do.  Depay was very much on the second plane, which is all you need to know.  They didn’t even have Zlatan’s ego on board, that would have surely made it three planes.  The second plane got lost, and ended up landing at an airport 70 miles away from the original destination.  Jose then had to move a press conference out of the initial room as it was too hot.  None of this mattered in the slightest however, as the reason they were there – a Manchester Derby in Bejing – was cancelled as the Bird’s Nest pitch had been destroyed by excessive flooding.  Yeah, that was a very worthwhile pre-season adventure.  Still, the thought of thousands of Chinese United fans in tears having waited so many years to see the team they have supported for five minutes was quite heart wrenching.

Staying with United, Juventus have asked that Ed Woodward sanctions another £8m on top of the original £100m or so bid.  Does anyone else think they are just messing with him?  Mind you, with Juve supposedly signing Napoli’s Higuain, much to Arsene’s surprise, they might need a cash influx.

Stoke are having quite the transfer window as Hughes continues to find every single player that is the complete opposite to the Pulis blueprint and tries to sign them.  “The Welsh Pirlo” has now joined “The Swiss Messi” and “The Austrian Ibrahimovic” as Stoke look to max out on the small technical kind of stuff that people have spent years pondering on whether it work on a wet, cold and possibly windy Tuesday night at the Britannia.  Stoke also snapped up the Egyptian Sobhi from Al Ahly.

Big Sam conducted his first press conference as the new England manager.  If he mentioned the fact that he managed to play Jermaine Defoe up top on his own he mentioned it a hundred times.  In slightly more positive news, he refused to commit to Rooney being his captain.  TFTTF can genuinely not see how Rooney fits into an Allardyce team.  Unless, of course, that team is Sunderland, Blackburn, Bolton or West Ham where they would be grateful to have him in the side.  Allardyce will make his debut against Croatia in September, which gives us the exciting prospect of Mark Noble and Lee Cattermole kicking lumps out of Modric and Rakitic.

Mike Phelan has decided it has time to stopping being a complete number two and step up to a hot seat.  Conveniently, there happens to be one at the club that currently employs him, Hull City.  Saying “I understand why Steve felt like he had to leave, I don’t know why they didn’t back him” he then made it clear that he would love the chance to manage the side to the bottom of the table by Christmas and accept a significant pay-off in time for the January transfer window.