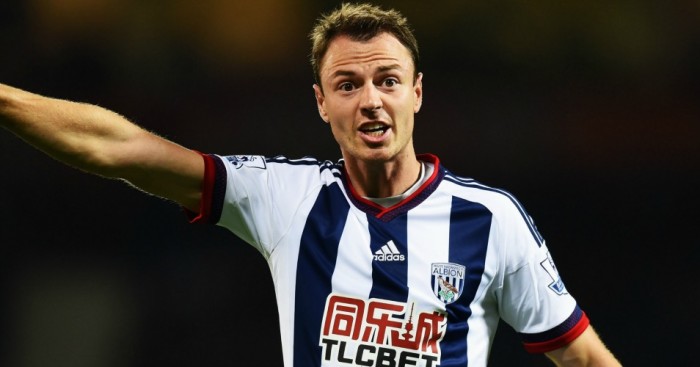 during the Barclays Premier League match between West Bromwich Albion and Everton on September 28, 2015 in West Bromwich, United Kingdom.

Arsenal fans worried that Arsene has completed his transfer business for the summer, fear not.  Word on the street is that he is making a £15m move for West Brom’s Jonny Evans.  I’ll just leave that there a moment, let it sink in for you.

How starved of anything interesting have United fans been for three years?  One shinned “acrobatic” volley from Zlatan and social media melts down in a way that could only be bettered if Elvis was spotted in the crowd.
I hate pre-season friendlies.  As I have already mentioned, they do not count.  Therefore someone needs to gently point out to the United fans, shaking with excitement at the thought they could actually improve on their fifth place finish last season, that one volley against Galatassary in a pretend competition does not mean the messiah has landed.  The game was so meaningless even Wayne Rooney got a couple.

In other United news, defender Cameron Borthwick-Jackson is said to interest West Ham United.  West Ham would like to bring Borthwick-Jackson to the East End of London where he would immediately qualify for the “Least East End Sounding Name of 2016.”  The potential move clearly signals Jose’s categorical commitment to developing the academy talent at Old Trafford.

In news that really does sum up the state of the English national team, James Milner is considering retiring from international football.  For me, any player involved in the recent Euro 2016 campaign should not be allowed to retire from international football.  They should be made to go through the public humiliation of being dropped from Big Sam’s first squad.  Yes, that includes you Harry Kane.  Even if you were tired.

I’ll presume Kevin Gamiero was on Arsene’s piece of paper entitled “strikers I would love to buy.”  My presumption is based purely on the fact that Gamiero is (a) French and (b) will have had no interest in joining Arsenal whatsoever.  Gamiero has swapped Sevilla for Atletico Madrid where he will partner Griezmann, another player that Arsene is perennially linked to.

I think Diego Costa has finally picked up on the not-so-subtle hints that Conte has been dropping.  Costa clearly does not have a long term future at Chelsea, according to the new Chelsea manager.  Costa was caught on video telling Sergio Ramos that he wants to leave.  I get a sneaky feeling Ramos won’t be knocking on Zizou’s door to pass on the message.

The expected replacement for the Brazilian-Spaniard is a player that has popped up unexpectedly on Chelsea’s radar.  They’ve spotted a Belgian lad by the name of Lukaku, and they think he might be worth £60m.  If only they could have found him sooner, he would have been much cheaper a few years ago.

Chris Coleman is now odds on favourite to take over at Hull City.  What kind of reward is that for the summer he’s had?  Still, Hal Robson-Kanu will be happy.  Has that deal happened, or is Hal still waiting for a move to La Liga?

King Klopp is a clever cookie.  Pre-empting the cries on Merseyside of “what the hell is that?” Jurgen has said that he loves Liverpool’s new third choice kit as “green is the colour of hope back home.”  If he can get away with that, he will easily be able to persuade the Kop that they don’t need a proper striker.

Martin O’Neill has said that Roy Keane should forget any thoughts he may have about going back into club management whilst working with Ireland.  According to O’Neill, Keane “cannot do two jobs.”  Fans of Ipswich might think that O’Neill is giving Keane too much credit, and one job is a job too many.

Manchester City target Leroy Sane either flew into Manchester for a medical yesterday, or signed a new four year deal with Schalke.  TFTTF isn’t sure which story to believe and is, frankly, past caring.

Yesterday marked the 50 year anniversary of my fellow countrymen waking up, realising it wasn’t a dream and starting to go on non-stop about the fact that England won the World Cup, once.  50 years of hurt?  50 years of please stop going on about it.