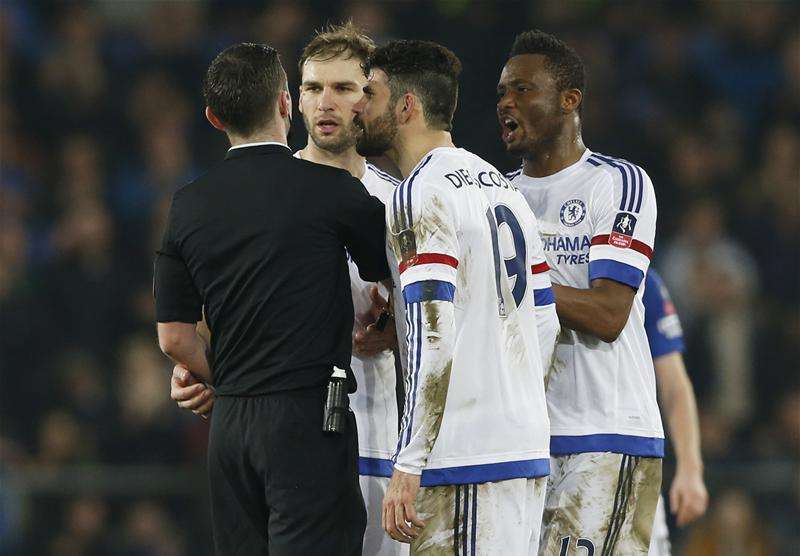 Each new season the referees come out with some kind of new “clampdown” to try and assert their authority on the players they desperately crave to be friends with.  Top of the list for inconsistent interpretation this season is holding at corners and dissent.  We’ve been here before, we know what will happen.  Some will give it, some won’t.  Fans will moan, pundits will criticise and referees will look like humans who see different incidents through different sets of eyes.  If only there was something all referees could unite on, something that they could all judge in the same way, every time, without fail.  Step forward Diego Costa.

Yes, there must have been a referee mandate that went out before the season kicked off explaining that all referees must clampdown on Costa being given any form of second yellow card.  Especially if he has not yet scored the winning goal.  We saw it against West Ham and we saw it again this weekend against Watford.  “Kicking people for fun, Diego?  Carry on!  I’ll look the other way, despite the fact you are already booked.  Chuck in a dive as well if you feel like it” seems to be the general principle.  Still, he adds something to the league doesn’t he?  With Zlatan looking worryingly like the people’s princess, Costa needs to be maintaining his role of pantomime villain.  Chelsea won again 2-1, Watford unable to hold on to their 1-0 advantage.

United are quietly moving through the gears and setting standards that their rivals have to keep to.  Their victory over Southampton on Friday night was a United performance many have been used over the years.  Southampton played very well, but United won.  It was as simple as that really, you know, the sort of victory champions deliver.  Not that I am saying United will be champions, god no.  I am bestowing that shocker of a prediction on Hull.  We’ve been here before, haven’t we?  Tipped for relegation, barely strengthened their squad from the previous season, a man on the touchline that nobody would have really chosen themselves, much preferring the guy that was their previously?  Yes, Hull are this season’s new Leicester and we should all start looking forward to the day they are given the guard of honour at the Etihad, especially if they get that Chinese investment that is being talked about.  Hull soaked up the pressure and beat Swansea 2-0.  That sounds pretty familiar too.

It’s almost as if the Chinese moneymen have realised their league isn’t worth investing in.  It is also rumoured Liverpool might be about to sell their soul to the Far East.  That’s presuming any top flight English club actually has a soul any longer.  I mean, Liverpool’s American owners cutting their losses and selling to a Chinese consortium hardly brings back fond memories of Shanks and Paisley, does it?  The Yanks might have to do a bit of a hard sell if their prospective buyers were at Turf Moor on Saturday.  Sean Dyche has got this Premier League thing nailed this year.  All he needed was to buy Defour and suddenly Burnley are unbeatable.  Two early goals saw off Klopp’s men which featured one of the worst midfield performances of recent times from their skipper, Jordan Henderson.  He’ll still be a favourite of Big Sam though, guaranteed.

Pep has had three games in charge at City and they have won fifteen penalties already.  Incredible.  Aguero actually managed to score this one in Saturday’s early kick off, and City went on to crush Stoke 4-1.  Imagine how good they might be when they sign a goalkeeper that can actually pass a ball and Pep’s players cotton on to his new fangled ideas regarding full backs and wingers, hey?

Champions Leicester could rightly claim to feel a little bit hard done by on Saturday night.  Coquelin should have been sent off and they should have been awarded two clear penalties in their 0-0 draw with Europa League hopefuls Arsenal.  That said, Vardy really should have put the Foxes out of sight but wasn’t a fan of hitting the target.  Arsene was presumably delighted with the result, going to last season’s league winners and keeping a clean sheet proving he has been right not to invest big money in some new central defenders.

Spurs quietly and efficiently took Palace apart 1-0.  Palace have confirmed the £27m signing of Benteke and boy do they need him to be the Villa version and not the Liverpool version.  Everton won 2-1 at WBA the winner coming from Gareth Barry who, I am not ashamed to admit, I thought must have retired by now.   The Toffees also confirmed that Lukaku is going nowhere.  See, that is what signing Bolasie does for a club.

Look what happens when you play players in their best positions Slaven!  Mikael Antonio scored the goal that will secure his place in pub quiz question folklore for decades to come by scoring the first ever Premier League goal at the “London Stadium.”  It’s called the “London Stadium,” I presume, because reminding everyone that it is actually the “Olympic Stadium” every other week would be pretty offensive to most tax payers.  Bournemouth need a win and fast, otherwise it will be a very long season and Eddie Howe might finally start to age.

Goal of the weekend, and subsequent photo on social media of the weekend, has to go to Middlesboro’s Struani.  The Uruguayan netted a stunner from distance to give Boro their first win of the season and edge Moysey closer to the door marked “managers that actually are not that good.”