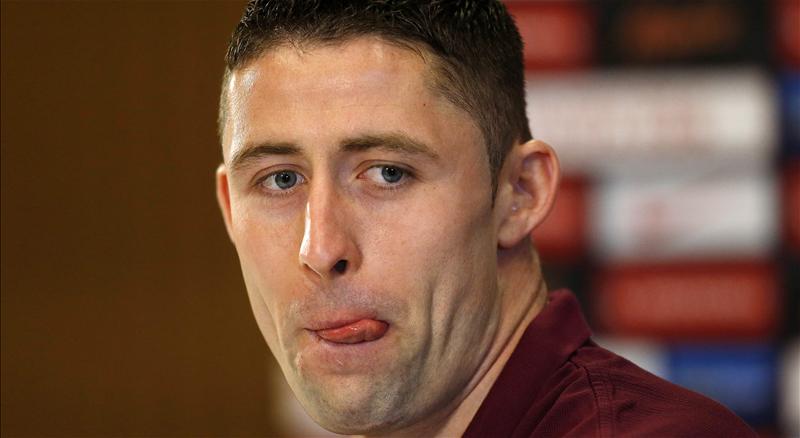 Gary Cahill was outraged that no foul was given in the build up to Swansea’s second goal on Sunday.  The England centre back claimed that “the foul could have been seen from the moon” or, as we prefer to say now, the TV cameras at Anfield.  Eden Hazard also piped up, saying Chelsea must learn how to defend as a team, whilst casually wandering around high on the left waiting for someone else to win the ball back for him.  JT is now a doubt for the Liverpool game meaning that David Luiz is going to be reintegrated in a match where he is going to have a lot of traffic flying around him.  The “Luiz-will-make-a-ricket-ometer” is currently reading at 9.7.

Arsene Wenger also has injury problems that make him frown.  Ahead of the Champions League match against PSG, he is without a key defender.  It all sounds rather familiar, doesn’t it?  Koscielny is clearly still suffering from the rush of blood to the head that saw him nail the overhead kick of the weekend.

Claudio Bravo has waved his membership card of the goalkeeper’s union in the air.  I say waved, he came out feebly and flapped it in the air a little bit.  I jest, Claudio, I jest. You weren’t the only City goalkeeper making his debut and looking like he’d never played football before this weekend.  Bravo spoke out in support of himself, saying he felt “very comfortable” in his debut at Old Trafford.  How you feel on the inside and what the rest of the world can see are often two very different things.

Harry Kane believes the English contingent at Spurs will help them in their Wembley Champions League debut this week.  Kane believes that due to the high number of England internationals in the Tottenham side they will feel comfortable at the home of football.  Yes, I am sure all the Spurs fans are just preying that you can all transfer your England form on to the Champions League stage.

Romelu Lukaku is suffering from real first world problems.  He is upset at Everton because he had to fund his own private jet ride back from his recent Belgium duty.  The big striker is now a couple of hours work out of pocket as the bill was around £6500.  I am sure a lot of you will join me in saying, “ah, diddums.”

Jose has claimed Rashford has played his way into his starting line up.  That all sounds very nice, doesn’t it?  Of course, that is not really the message Jose is putting out there.  What he is really saying is, Lingard and/or Mkytaryan will do very well to play for him again.  It’s nice to see Jose is already up to his old tricks and getting his exit points lined up.  When he and Pogba explode, it’s going to be huge!

I thought I would end this afternoon’s column with a story that could start to make a few of you worry about the state of David Moyes’s mind.  The Sunderland manager, who will take on his former club tonight, believes his Everton side were just one world class striker away from competing for major honours.  Of course you were David.  And what about that Manchester United team you inherited?