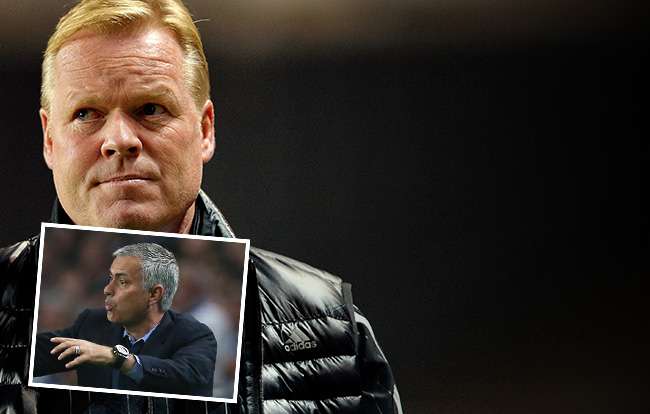 It turns out I was wrong!  I know, whatever next?  Ronald Koeman did care about the EFL Cup way more than I thought, and certainly way more than I do.  He gave his defenders a proper dose of Mourinho following Everton’s shock exit to Norwich.  Having argued their case on FANTVuk that they could well finish top six, you can expect to see the wheels firmly coming off the Everton FC bus over the next few games.

Bournemouth have got themselves into that rather nasty habit of losing.  They lost to Preston in extra time, conceding a hat-trick to a player who won’t even figure in a match Preston really care about.  Don’t fall into the trap of thinking that it is only Premier League teams who are not bothered about the EFL Cup, oh no.  Even Championship sides are far from interested in being distracted from their promotion challenges.

Not content with over paying to bring one former midfielder “home” United want to repeat the trick in January, well if you are foolish enough to believe any much the Sun peddles.  But hey, for comic value I will run with it.  Danny Drinkwater is a £30m target for Mourinho in the next transfer window.  Drinkwater plays best when knocking it to a quick central striker.  Therefore Drinkwater will fail if he goes anywhere near the current United squad.

Staying with United, Gary Neville believes there to be a mole within the squad.  This is due to the level of information that a certain newspaper is getting its hands on.  Neville, who got used to a toxic dressing room in his stint at Valencia, is convinced someone is leaking information.  A mole you say, so someone immobile with very limited vision who certainly shouldn’t be playing Premier League football and spends a lot of time burying his head underground (so as not to accept his reality, I know I am stretching it).  Can’t think who that could be, can you?

Mourinho is now down the excuse number seventeen on his list, Louis van Gaal.  Apparently it is all Louis’s fault that Jose has lost a couple of games.  That’s funny, because it was Moysey’s fault that LvG didn’t do too well, and I am sure Moyes may have made reference to the dung heap he was left by Sir Alex.  Yet who has been the constant thread through all this?  Ed Woodward, that’s who.

Arsene, the manager who bought Lucas Perez, says Lucas Perez uses his left foot too much for his liking.  A good friend of TFTTF suggested that being left foot dominant didn’t really affect Maradona, Messi and Rivelino too much.  Still, that is what being a tight wad gets you nowadays, a one footed footballer.

Jurgen Klopp got told off for swearing on live TV.  He was, um, disappointed that Liverpool’s win over Derby was not shown on Sky, saying that all games are shown in Germany with a little bit of potty mouth thrown in.  Better still was the Liverpool PR man telling King Klopp off and him not giving a monkeys.  We need more managers like him.

Antonio Conte was very pleased with Cesc’s contribution on Tuesday night.  He said he got the kit laid out beautifully, the coffee was great and as a special treat Cesc was rewarded with some game time on the pitch.  Fabregas went on to score twice, meaning Conte might have to start looking for a new coffee boy.

Pochettino must still be suffering from the news that he is going to have to name a side without Harry Kane in it.  Poch claimed that Marcus Edwards reminds him of Messi.  I have to admit, writing a daily column about the Premier League and being an avid player of a certain Football Manager simulation game I should have probably heard of this kid.  But no, I have no idea who he is and if he is anywhere near as good as Messi I am quietly confident the English media will kick it out of him in the next year or so.

Today’s footnote will once again be the EFL Cup where two teams managed to lurch themselves out of crisis mode.  Yes, United and West Ham fans can be cock-a-hoop once again as they are well on the way to being the greatest teams in the land once more.  United needed to summon Rashford off the bench to see off Northampton 3-1 and West Ham needed a 94th minute free kick from Payet to wave Accrington Stanley goodbye.  United fans were hoping Rooney getting 90 minutes would mean he would be missing on Saturday, but surely he will talk Jose into picking him now they are winning once again?  Spurs barely blinked in the absence of Kane, seeing off Gillingham 5-0 including a goal for Kane-lite Vincent Jansen.  Amazingly, Sunderland won a game and Paddy McNair scored twice.  Southampton beat Palace and City beat Swansea, but the knives are very much laid at the dinner table for Mark Hughes as Stoke dominated but contrived to lose to Hull.  They did the draw after the final whistles, but you can go and find that for yourselves if you are interested.