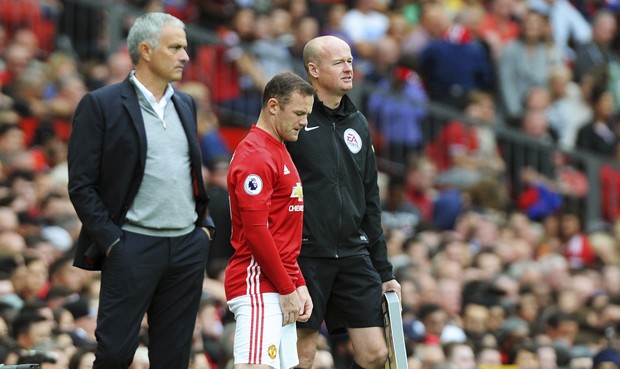 Well, well, well. In just 45 minutes every role Wayne Rooney has played in the last year or so was filled far better by someone else, including that of “corner taker.” Who would have thought that by listening to the “footballing Einsteins” that Jose would kick start United’s season so emphatically. Relieved of two large rocks in the middle of the park, Pogba, Herrera and Mata were free to pick Leicester apart. Leicester are suffering like Stoke, since referees have clamped down on grappling at corners. Credit to United though, everything about their performance was everything people have been crying out for. And it means that I have to turn my attention elsewhere.

What about Kloppo, can I pick on him? Not a bit of it as Liverpool swept Hull to one side 5-1. Mike Phelan must have seen it coming as he dressed appropriately. That suit will next get aired at a funeral. Sahko handed in a transfer request in a very modern way, airing his grievance with King Klopp via Snapchat of all things. If he was slightly ahead of Yaya Toure in the “likely to get a game in the League Cup soon” stakes, he has certainly slipped.

It’s only fair to mention Spurs at some point this season. Whilst Poch has been getting us all focusing on his perfect “new contract signed with Player X” stare, Tottenham have sneaked into second place. Who needs Kane when Poch has a new Son in the family? The back-up front man scored twice as Spurs got all three points at Middlesbrough.

Having tipped Everton, on live TV, to finish in the top six this season it was completely nailed on that Bournemouth would win their match this weekend. Eddie Howe needed a league win desperately and the Cherries delivered.

Sunderland, oh Sunderland. It’s not easy to lose to Palace when you are beating them 2-0 with a mere 30 minutes remaining. Yet Moysey’s men grabbed defeat from the gaping jaws of a much needed victory, succumbing 3-2 in injury time. The winner, well that went in off Benteke’s head obviously. Pards looks smug at the best of times, but his smug-o-meter rating has hit a new high of 7.9 as Palace have taken the most league points in September (or something like that, that statement may not be 100% factually accurate).

One thing that is certainly factually bang on is the fact that Stoke playing WBA was unlikely to be interesting apart from the fact that a WBA win could have seen Hughes lose another job. Stoke led, yet WBA scored from a corner. I know, shock right? Ever since Shawcross hasn’t been able to hold, pinch and punch his way through defending set pieces Stoke have started shipping a few.

Pep claims he hasn’t been thinking about the Premier League title. I guess when it is that obvious you are going to win it, there is little point thinking about it. Swansea put up a brave fight, possibly as they don’t want their fate to be in Ryan Giggs’s hands, but City were just too good. Aguero netted another brace and Raheem Sterling capped another fine performance with a goal. If Pep is this good at working with young English talents, would City be so kind as to sign a few more? It will be, however, interesting to see how he replaces Kevin de Bruyne in the short term as the Belgian’s hamstring injury will rule him out for a month.

Each game John Terry misses increases his chances of getting a three year extension to his contract tenfold. Chelsea bottomed out several times under Mourinho last season, but the 3-0 defeat to Arsenal was a new low. Admittedly, Arsenal play like this once in a while and look like they could never lose again, but nobody could deny that Gary Cahill was in line for their man of the match award. Even from the moon you could see he was terrible. The patient souls that are Chelsea fans post-2003 have been calling for Conte to be sacked following the defeat. Just because the United fans seemed to be able to spot the obvious doesn’t mean Roman should start courting their opinions.

Finally, West Ham. Charlie Austin was very much rubbing his knee in David Gold’s nose by giving Southampton a first half lead. The striker that the Hammers did not want, intimating his knee meant he was finished, then turned provider setting up Tadic. James Ward-Prowse rounded things off nicely for a Southampton team coming to grips with Claude Puel’s style of play. Bilic will have headed home to name his new daughter in the worst of moods, so be sure to find something like Martha on her certificate.