FOOTBALLERS!…eh!? One minute they’re being unbelievably crass, gitt-ish and thick; the next minute they’re being pathetic, greedy, self-absorbed cry babies…it’s almost like…er…It’s almost…erm…sorry, I’ve lost track of the point I was trying to make. Let’s start over, if it’s not YaYa Toure (not a Dexy’s Midnight Runners lyric BTW) throwing his toys about because Chelsea failed to secure Mary Berry’s cake making services to suitable honour his birthday; then it’s “Saddo” Berahino striking for a transfer to a place in Spurs starting eleven, on the strength of his mum saying he’s “quite good at that football”. Modern footballers are, by and large, the most odious collection of greedy, thin skinned, petulant, thickheaded narcissist’s it’s possible to imagine. Genial Cockney monkey ‘Arry Redknapp once laughed about Rio Ferdinand missing a drugs test; H stated that Rio could do that “perfectly innocently” as (in his own words) he was “surprised that Rio’s brain could generate enough energy to keep his legs moving!”…I think that sums it up.

In recent weeks we’ve had two classic “Didums” moments: the first saw textbook “one season wonder” Dimitri Payet refusing to play for West Ham as (despite a new contract, pay-rise, fan adoration and a team practically built around him) they were not quite in synch with his “ambitions”. We mere mortals can only sit and speculate as to what those lofty “ambitions” might be but, I’ll bet my diamond studded arse, one of them is to end up richer than Croesus, a Turkish King famous for being really, really REALLY rich!

The second farce involved “The Angriest Man in Football”, Diego Costa and his “bad Back”/desire to leave to earn £1million per second in China. Now, if you are the Chelsea hierarchy it was a case of “Much Ado About Nothing”, the media however told a tale of intrigue, skulduggery and petulance the would move “Hamlet” to say…“Bit much that, innit?”…or words to that effect. All concerned have backed down from, previously intractable, positions and have agreed never to speak of this unpleasantness again…which the Chelsea fans will forgive (for blindingly obvious reasons) but the wider football world merely shakes it’s head, tuts and remembers a time when the game was about the size of your heart rather than the size of your wallet.

I therefore post here a couple of cartoons that I think give both the situations their due! Poor old Slaven Bilic carting Payet’s baby-man around in a “moneybarrow” and, the great, Dan Walker quizzing Conte while “Costa Kong” kicks off in the background; form a snapshot of modern football life. People who behave in this manner SHOULD be laughed at loudly and often; rather than toadied too and indulged; you cannot blame a puppy for crapping on the carpet if you have NOT trained it to do otherwise. In today’s entitled, instant-gratification culture we have, seemingly, the footballers we deserve…and that is sadder than the world’s smallest violin playing the world’s saddest song. 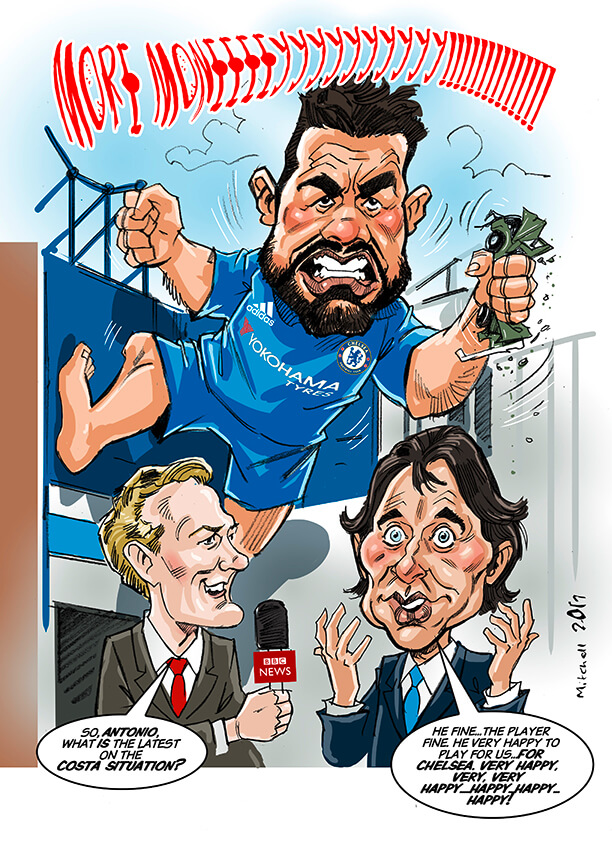 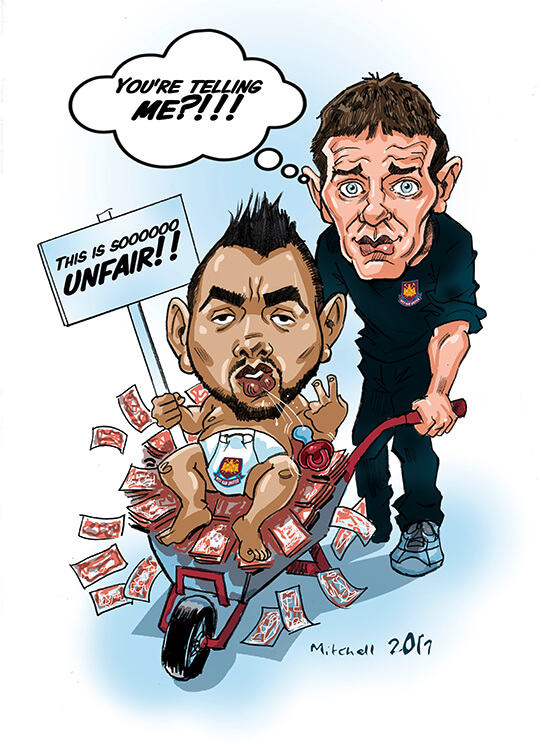 What Tales Thinks: Match of the Day

I wouldn’t play there for all the tea in China, said nobody