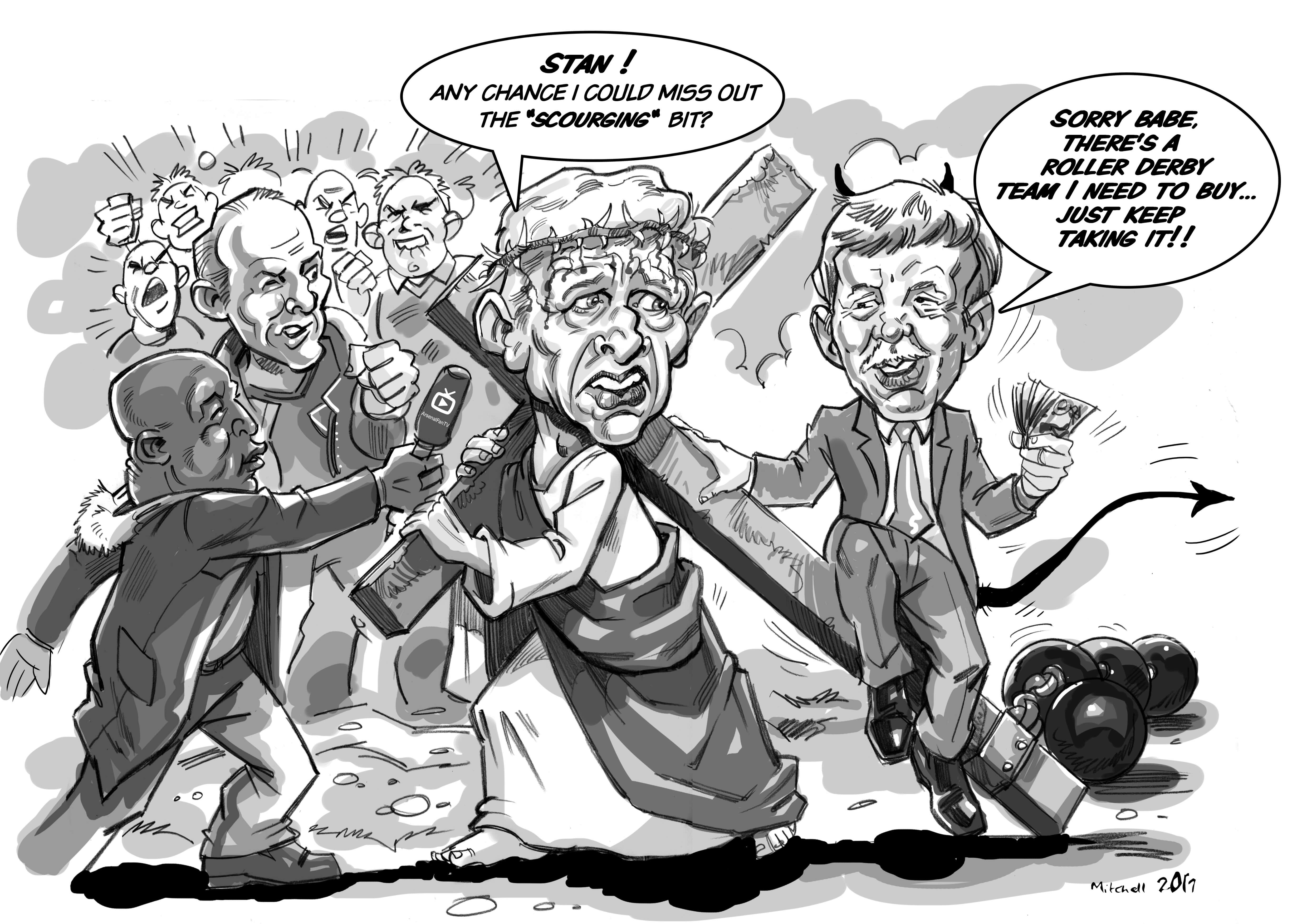 A very wise man once said: “Sometimes it can be a very long walk between the milestones of pleasure” and you know what he means…right? Indeed, as a Newcastle fan, that “long walk” can seem as if you’re doing it blindfold…through treacle…in fucking CLOWN SHOES!! But I digress.

The longer the walk the more introspective the journey and, whilst traversing that “Long, dark, teatime of the soul” it’s easy to lose your way, your mind and your hope…take it from one who knows.

Just such a trial is currently beleaguering Arsenal fans, with Robbie, Claude and Troopz leading the choir, the clamour of voices calling for Arsene’s head has reached “fever pitch” (nod to Nick Hornby there) and even the man himself has a tortured, broken air around him, to add to his usual hang-dawg demeanour.

Arsenal’s “dazzling” 45 minute display of confidence building against plucky Lincoln City has done nothing to calm the situation; quite the opposite. The sight of Sanchez, Walcott and co bamboozling welders, van drivers and insurance salesmen seems to have angered the Emirates faithful (that still doesn’t sound right) to beyond breaking point. As Donald J Trump said recently “Grab her by the PUS…” no, wrong quote…”The time for trivial fights is behind us”; now whether that means that the time for “serious fights” has now replaced it…well…who knows? He’s a moron and that’s that! But, if I might quote another, more learned, US Prez for a second: “We are not enemies, but friends. We must not be enemies. Though passion may have strained it must not break our bonds of affection. The mystic chords of memory, stretching from every battlefield & patriot grave to every living heart and hearthstone all over this broad land, will yet swell the chorus of the Union, when again touched, as surely they will be, by the better angels of our nature”

When Abraham Lincoln said those words it was a plea for unity after the civil war…to a lesser degree those same issues beset the great Woolwich Arsenal FC currently.

Look, I get it…I UNDERSTAND! I’m well versed in long, disappointing stretches of pity-less underachieving. It’s more soul-crushing than…a giant…soul-crushing…THING…that’s busily…erm…crushing your…soul!
Limp metaphor, I grant you, BUT, here’s the thing, Arsene Wenger is a smart guy and an experienced manager…HE KNOWS SOMETHING IS UP!

When you get the chance take a good look into Arsene’s eyes (launches into The Advert’s “Gary Gilmore’s Eye’s” substituting Gary for Arsene…one for the teenagers there) if you cannot see the hurt, the pain, the grinding sorrow of the man…then you’re just not looking hard enough.

Here is the one and only issue that needs fixing: #SPOILER ALERT: Arsenal FC have £226.5M in cash in the bank and (Allegedly) Stan Kroenke has tied Wenger’s hands to make sure it stays that way. You see (Allegedly) Stan is using that money (Allegedly) as collateral to borrow (Allegedly) Dollars to grow his business empire stateside, so (Allegedly) the status quo at Arsenal will continue for the foreseeable future…or until Arsene throw’s in the towel (Allegedly). I hope I put enough (Allegedly) in there…don’t want Stan spending Arsenal’s cash suing me!!

In short, The Professor has been hung out to dry by his paymasters! For a football man like Wenger it must be an agony verging on unbearable.

Now, I urge Gooners everywhere to think on this before gathering pitchforks and lighting torches: I would happily trade club histories with Arsenal: they can have our Fairs Cup (69) and Texaco Cup (73) and we’ll have all their goodies. Seriously, imagine Arsenal had had Newcastle’s “glorious trophy history” then the club simply would not exist anymore. The fans would’ve torched it by now and trooped off to support Chelsea or the Spuds. So whilst I’m sympathetic to their plight…I cannot conscience their hysterical over-reaction. Sometimes, when you are walking through Hell, it’s best to stick together and keep walking.