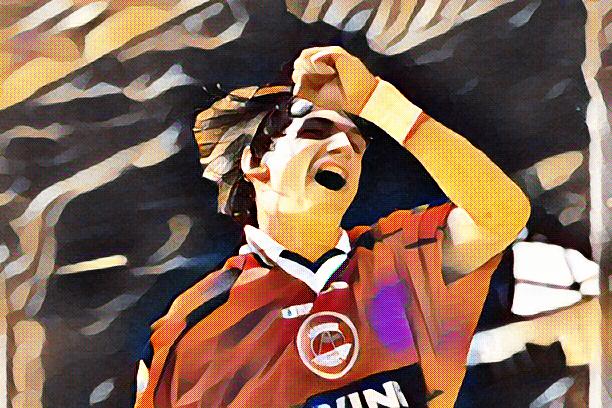 In the aftermath of the Champions League Qualifying Phase draw there was a minor drama developing over the possibility of Celtic having to travel to Belfast to take on Linfield on or over 12th July – a date significant in Northern Ireland for reasons irrelevant to football, so I’ll allow you to do your own research there.

Ignoring the fact that Linfield still must beat San Marino side La Fiorita over two legs, the media went into overdrive with their usual hyperbole. Images of running battles in the street were conjured with the surrounding streets of Windsor Park destined to turn into a scene from Platoon.

Enter Joe Miller. Yes, I hear you flitting away at your keyboard there on google – “Joe Miller football Wikipedia”. Joe Miller is a former player for Celtic and Aberdeen and apparently a dab hand at spinning a yarn or two.

In an interview with Scottish newspaper The Daily Record, Joe Miller told of a friendly match he participated in at Windsor Park in 1995. He explained that the Aberdeen players played 90 minutes of football with ‘red dots’ on them – a reference to lasers aimed at the players. He also described an event after the match when he and three other named players were harangued by angry locals from a nearby drinking establishment as they carried match balls down the street post game.

It all sounds rather far-fetched, doesn’t it? Perhaps that’s because Mr Miller’s storytelling capability makes Walter Mitty look only like a mild spoofer. Linfield FC responded with one of the greatest statements I have read from Northern Irish football in some time.

Firstly, Linfield confirmed that Windsor Park then was wholly enclosed from any surrounding streets.  A quick look at the map of the area will show a shortage of local pubs in the area. Further to these two points – Linfield have never asked an opposing team to walk the streets carrying match day equipment.

Secondly, the reference to laser pointers is somewhat before time. Linfield confirm the fact that during the year specified neither the then-RUC nor the British Army (who were posted to Northern Ireland) carried weapons with laser sights fitted as standard. Besides that, it would be a few years after 1995 that laser pointers came into the public domain as easily obtainable and affordable.

The final, and in my opinion most hilarious, point made was that Linfield FC hold no record of hosting Aberdeen in a friendly match at Windsor Park in 1995. Indeed, Linfield have never actually played Aberdeen at any time, home or away!

A few days later The Daily Record produced an apology from Joe Miller. Miller now concedes that he simply got mixed up with the stadium he was referring to. Also, the fact it was a behind closed doors training match and not a friendly. Joe Miller is yet to clarify when or where this supposed event took place or even who the training match happened to be against!

Whatever the true story is behind this, I am so looking forward to reading Joe Miller’s forthcoming autobiography. It’ll be great to read about that time he landed on the beaches at Normandy, handed the World Cup to Diego Maradona in 1986 and did not have sexual relations with Monica Lewinsky.