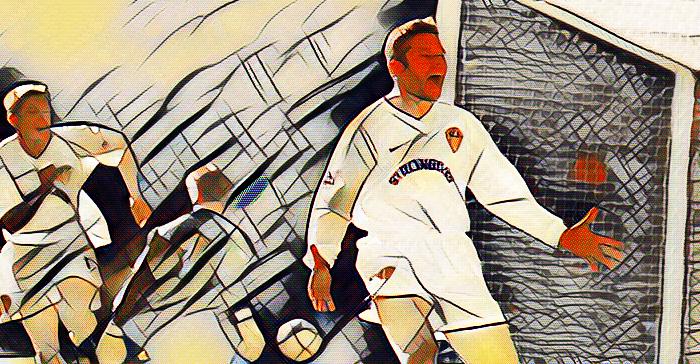 On Saturday, Wolverhampton Wanderers won promotion back to the first division for the first time since their back-to-back relegations of 2012 and 2013. They’re a bit of a mad club y’know. Maybe they just picked a wrong time to be really good at footy, the 1950s that is. Similiar to Preston North End, they’re one of those clubs your Granddad will lament about until the end of time, and sometimes their only significance seems to be the odd passing mention in books detailing great players you’ve never heard of who played in the pig-bladder era of the sport.

They’re referred to almost exclusively by what sounds like a North-West American college ice hockey team, despite the word “Wolves” actually not being anywhere in their name. And their real title sounds like the cheap Pro Evolution Soccer alternative KONAMI had to put in because they couldn’t afford the official licensing. But like them or not, they’ll be back in the top flight next August. And it gets the nostalgia flowing like nothing else.

Side note, I quite like #ThePackIsBack to be honest. As far as football hashtags go, it only gets a 4/10 on the ‘#WengerOut’ scale of cringe-worthiness.

Wolves, just like so many others who have been banished to the purgatory of 46 games a season and Sky Bet advertising, bring their own set of memories and nostalgic emotions to top-flight supporters. They bring their own set of flaws and mannerisms that didn’t get appreciated until they went down. And even though us glory hunters at the top of the food chain would struggle to name a single player who has 10 goals in the Championship this season, we all have our picks of which clubs we’d like to see back in the big time.

Checking the Championship table once every six weeks is a yearly tradition of mine, dreaming of who might make a return in the coming months while hoping Reading stay down for at least another 30 years. All while being content in the knowledge that unlike the rest of football, I don’t have to emotionally invest myself in it. Let’s be big club snobs for a minute here and admit that there’s plenty of sides in the top flight at the moment that you’d rather swap for more old school ties e.g. Bournemouth for any 1 of the 72 other teams in the Football League.

Whether it be Millwall and Leeds for the needle, the Sheffield clubs and Notts Forest for the tradition of it all or Fulham, for the single-greatest away end in world football. It all goes off at 0:40.

England is blessed with an unbelievable amount of professional clubs who have character and identity, and I as so many others, would take plenty of them back in a heartbeat. Charlton’s always had a place in my heart. I couldn’t tell you anyone who’s played for them in the last decade, and the most recent manager that I’m aware they had is Alan Curbishley (2006). They were in the league when I first started watching football though, and their mad little badge with the sword on it will always remain in my memory, even if they were the 2005 equivalent of today’s Watford.

There’s a heap of sides I’d never take back as well. As aforementioned, Reading. But also Queens Park Rangers, Hull City and Wigan Athletic, because I can’t be arsed watching any of those lads draw 0-0 at Turf Moor on their way to 34 points and inevitable relegation.

They all have their perks, their memories, kits, badges, grounds, retro players and fans. Shame half of them are crap now. Bournemouth, Leicester, Burnley, Manchester City, Swansea and Stoke all out. Fulham, Norwich, Leeds, Blackburn, Sunderland and Bolton all back. That’d be sound.

On a serious note, following this weekend of all weekends, regardless of how your football team is doing, remember that there are indeed some things more important than football.

29 years ago today, 96 children, women and men lost their lives at Hillsborough. We will never forget them.

Our thoughts are with the families, survivors and all those affected by the tragedy. pic.twitter.com/Kl0WvTKTDc

Rest in peace the 96. Never forgotten.