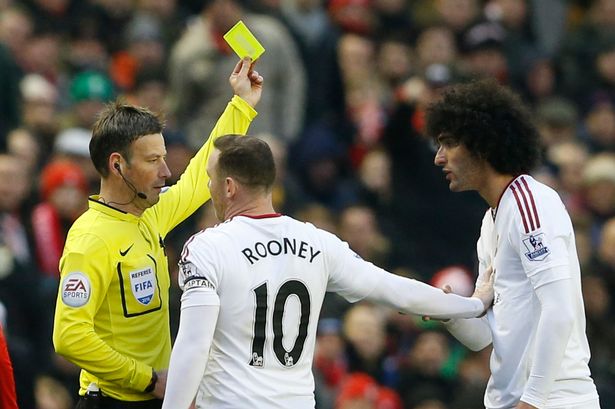 Credit to the FA, they are fantastic at multi-tasking.

Not content with just hanging around, trying to find someone English that might be up to the job of revolutionising the game they have also found the time to come up with the crazy idea that players who demonstrate really bad behaviour on the pitch should get punished for it!  Genius.  The governing body wants the referees to dish out more red cards to cut out the bad behaviour.  Naturally this has been lauded in the social media sphere as it is something that most decent people could do without, the image of Wayne Rooney swearing loudly in the face of the Clatt.  However, and entirely more realistically, there will be a few examples in the first round of matches and then normal service will be resumed, mainly to do with the fact that the vast majority of people would rather the officials got the basics right, like giving penalties or offsides correctly rather than faff about with a bit of naughty language.  Mind you, my money is firmly on a treble of John Terry, Wayne Rooney and Claudio Ranieri all to be dismissed on the opening day.  What do you mean I am stupid, that will never happen?  Oh yes, my mistake.  There is no way Jose is going to pick Wayne.

Of course, that is not the main news of the day.  It is rumoured, wait for it, that the FA will announce their new manager within the next three days or so, or even sooner if Sunderland get their wish.  All this really means is that Sunderland will be announcing their new manager quite soon.  Arise David Moyes, your time has come once again.

Juventus have rejected United’s opening bid of £100m, apparently.  Of course they have, because they know Ed Woodward is stupid enough to come lolloping back like a daft puppy with an extra £50m.  You would have thought United would have learned something by now.  I have no idea what, just something.

By now you would have thought it would be incredibly easy to believe everything Ranieri says without question.  But when the sage Italian says “Mahrez is going nowhere” it is still far to easy to give him the look of “are you sure Claudio, really?”  The title-winning manager is confident that Leicester will retain their star, but was less positive about Steve Walsh, who is sure to be off to Everton.

Stoke appear to be lodging bids all over the shop.  This week alone has seen them linked to Berahino and Lemina and today it is believed they are interested in an Ecuadorian striker called Jose.  I’ve never heard of him, and I am not completely sure that Mark Hughes had heard of him before a call from the guy’s agent.

Manchester City are quietly doing some very good business.  The Argentina goalkeeper Rulli is on his way to the Etihad, presumably choosing not to run it past Carlos Tevez first, for £4m.  Joe Hart fans can calm down, Rulli will only be popping into the Etihad to say hello then ship off out to Real Sociedad so he can “continue his development.”  Another player that Pep has the hots for is Schalke’s Leroy Sane.  The winger, 20 years old, will cost at least £42m and is looking forward to snuggling up next to Raheem on those very comfy City substitute seats.

Antonio Conte has made it very clear he has no intention of selling Diego Costa.  Conte scares me, so I believe him.  Anyone would think people believe Arsenal need a new striker, as it was Inter’s Icardi’s turn to be linked to the perennial Champions League qualifiers.  Icardi’s wife/agent seems to be very keen on the move and will be meeting Arsene later today.

Micah Richards is off to Sunderland for £5m?  Really?  Apparently that is the Aston Villa captain’s release fee.  He has a release fee?  Incredible.  If that is Big Sam’s final move as a Sunderland manager, he must really dislike Sunderland.

Remember that Pogba gag about Ed Woodward returning full with a big sack full of more money?  He couldn’t even wait for me to finish the column.  Pogba, £120m, done deal by all accounts.  Unless, you know, Pogba actually doesn’t want to become another one of Jose’s midfield robots.  If it does happen, what money on Felliani to Sunderland?  There could be some United midfielders available on the cheap very soon.  By cheap in the Premier League I do of course mean for anything in and around £25m.  Yeah, even for Carrick.