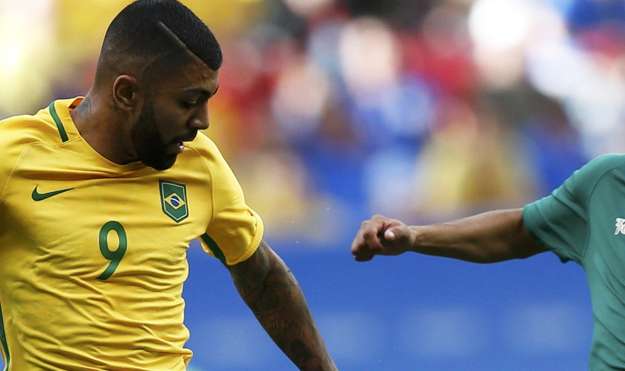 Is Ranieri a secret FM player?

Is Ranieri a secret FM player?  Quite possibly when you look the player currently with a big Leicester sized target on his shirt.  Juventus, both Milan clubs, PSG and Benfica have all been linked with the Brazilian star but it shows just how much the Premier League money talks when Leicester are now favourites to sign Football Manager wonderkid Gabriel Barbosa.

£23m is the price Ranieri is prepared to pay and word in the favellas is that Santos might be prepared to business with such a nice man.  They are used to the Jorge Mendes’s of this world kicking the door in and getting their own way but Claudio has rocked up with a bottle of his finest Italian wine, taken the directors out for pizza and said what a great job Rio are doing in the Olympics, or not doing, depending on which will offend Santos least.  Gabigol and Vardy up front, who would have thought that at the start of last season?

Ranieri’s door has taken its own bit of a kicking in the last day or so.  Arsenal, allegedly, have bid £30m for Mahrez.  Not that it is a real bid, you understand.  It is a pretend bid to keep the fans happy whilst Arsene thinks about how he can make the Ox the wide playmaker that he thought he was signing in the first place.  Mahrez has fallen for the ruse, and wants Leicester to accept this entirely fabricated bid.  A couple of points, if I may, Riyad.  If Pogba is worth £90m you are selling yourself short by believing you are worth a mere £30m.  If Yannick Bolasie is likely to go for £25m and Benteke can still fetch £32m then I cannot see Leicester letting you move for the standard Arsenal derisory bid.

Gabriel was getting Arsene’s hopes up with his whole “I’ll be fit for the weekend boss, honest!”chat yesterday.  The defender will be out for six to eight weeks with a damaged ankle.  I guess the question is, is that a Jack Wilshere six to eight weeks or an Alexis Sanchez six to eight weeks?  Gooners need it to be the latter, or not if they actually want Wenger to sign someone.

Sturridge in might miss game of football due to injury shocker

Talking of perennially injured footballers, Daniel Sturridge is “in a race” to be fit for the weekend’s opener against Arsenal.  For someone who loves an injury as much as Sturridge, I would have thought a race is the last thing he wants to be doing.

Moyes is as good as his word, you cannot accuse him of less.  Everton have rejected an enquiry from Sunderland about the availability of Phil Jagielka.  Will the Mackems be half ex-Everton, half ex-United by January?  Does Fellaini count as double?

Watch out for Hull City this season.  I made this mistake last year, so I refuse to write off the club that do not have a manager, are trying to find new owners and have just one fit defender available for the weekend.  Just watch them do something crazy and qualify for Europe.  If they can just convince Hal Robson-Kanu to come and show off his Cruyff turns on Humberside they could be an outside bet for the Champions League.  All hail the under prepared sides, it is a clever ploy you mark my words.

Paul Mitchell is a wanted man having left Tottenham.  “Who?” some of you are asking.  The former Spurs “Head of Recruitment” is the answer.  Chief Scout in old money.  He might be off to Leicester to replace Steve Walsh.  Judging by Leicester’s recent transfer links he will need full access to a very well known computer game’s database.

Apparently the first thing Paul Pogba’s mum did when the deal was finally announced was stock up on “Pogba 6” shirts.  I would love to think that she is planning on making a little profit on the side by selling them on eBay.  Just look for the account “therealpogbasmum” and check she has positive feedback.