Dude, Mesut tweeted some really cute dogs at me so that I would stay with Arsenal…

Fernando: I don’t understand the whole dog thing but we both know that they play a big part in your decision making…

Alexis: Yeah I told you right after we won the FA Cup. I care that Atom and Humber are happy, about winning, and looking good in my kit.

Fernando: Look, we both know that the new Arsenal third kit is absolute fire. That’s why you modeled it. And the gunners seem to have a good grip on your relationship with the dogs… But are they going to win…?

Alexis: I’m not sure, and that’s the problem.

Fernando: So here’s what we do.  You’re flying to London via Paris still – we booked that before it became clear that Arsene wasn’t going to sell unless they get a queen’s ransom. Bring that idiot lawyer of yours with you. I bet a million pounds that he’ll insta from the airport. Arsene will shit his pants and do something drastic. Mark my words.

July 31st: Alexis and his lawyer fly to London via France. Fernando meets Alexis in London to provide canine support.

Alexis: Hey Arsene, can you call back? I’m hanging out with my agent.

Wenger: Actually that’s good for me. Lemme get on three-way call with y’all.

Look boys, we are committed to keeping Alexis here this year, and we have done two things to show you Alexis that we still want you long term. We know how much you love the new third kit

(Alexis frantically covering the phone) Alexis: how does he know that??

Arsene:  We already made you the poster boy for its release – and we will be wearing the kit 5 extra times this year because you look good in the black.

Arsene: As for the second thing we did for you, lemme text you a picture. After you see it I promise you’ll want to sign a two-year contract with the Arsenal (trails off while mumbling about being able to sign two year contracts with Arsenal until career is over…)

Alexis – look Fernando, I’m not sure what this second thing is, but he was spot on about the kit. Maybe it won’t be so bad. Oh Arsene just texted me.

Alexis: Get yourself another Arsenal hat Fernando, we’re Gunners for life.

Fernando: What did he say?

Alexis: Take a look for yourself 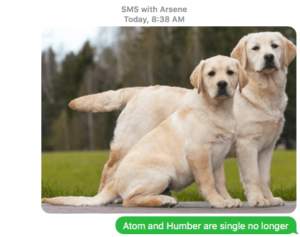