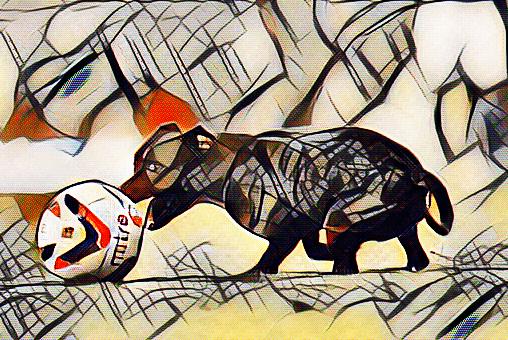 Premier League bigwigs have been accused of being barking mad after appointing a canine liaison officer to oversee a new initiative called for by the highly influential Retro Football Alliance (RFA)*.

And the move could see the top-flight hierarchy finally buckling to intense pressure from the RFA – whose president is former Manchester United keeper Massimo Taibi – and allowing each club the opportunity to allow a dog (all breeds accepted except corgis) on the pitch for just one game per season.

The bizarre move has been met with mixed response from the game’s modern day  players and managers. But a stray pooch casually wandering on the pitch, then being chased by hapless players and stewards, was a common sight at football grounds throughout the country in the 1970s.

But the practice was outlawed after an unfortunate 50-50 tackle between Arsenal enforcer Peter Storey and a border collie named Barney left the crocked canine needing surgery to rectify delicate inconsistencies in his “pelvic area”.

The bone-crunching clash, the noise of which was said to have been heard from the very back of the Clock End at the Gunners’ former home, Highbury, went down in the annals of footballing folklore**.

It fell to indie icons Half Man Half Biscuit to use the hound-on-the-pitch yarn to inspire their relatively well received track, “Even Men With Steel Hearts (Love To See A Dog On The Pitch)” – from the Some Call It Godcore album, 1995.

A Premier League spokesman said: “We are proud to be an inclusive organisation and see no harm in allowing one dog on the pitch for one game per club per season. It’s true Leeds United officials emailed to ask for two dogs but we had to remind them, for the umpteenth time that they are NOT a Premier League club.

“So, yes, expect to see dogs introduced, sporadically, next season. There is a weight of support for such a plan and this should be ratified at our next meeting.

“Of course, that would mean an immediate need for a canine liaison office to organise the dogs, handlers and to deliver education solutions to those with stakeholders with an investment in the scheme. We are simply being efficient.”

*The RFA was set up by ex-Chelsea bench-warmer Winston Bogarde in 2010 after he had a “deep and meaningful” chat with football hooligan book author Cass Pennant. Its aim is to champions elements from the forgotten game into the modern one.

**Tough-tackling Storey, who was also capped by England, later settled the so-called “midfielder versus mutt” court case with an undisclosed three-figure sum though no admission of guilt was declared.