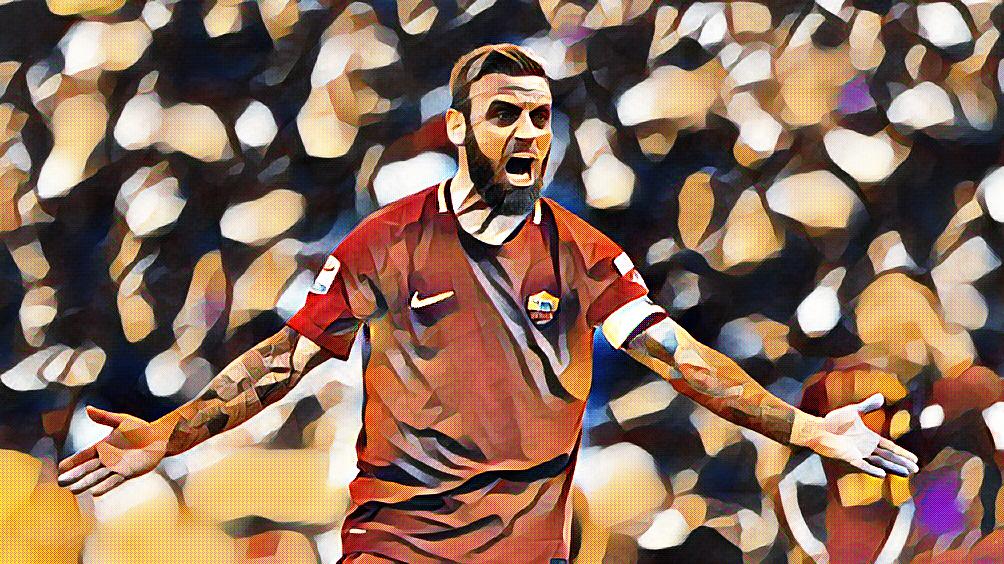 If Francesco Totti was the king of Rome then Daniele De Rossi – ever the Giallorossi faithful lieutenant – is surely the prince.

For much of his career, the limelight may have belonged rather to Il Capitano, but long has De Rossi roared from box-to-box in the red of AS Roma, cleaving an oft-bloody path from small-time hatchet man to one of Italian football’s most respected elder statesmen. Who, admittedly, still loves to kick people. A lot.

Today marks 15 years since De Rossi first pulled on the red and yellow jersey of his beloved Roma. 432 Serie A games later, this is our fitting tribute.

Beginning his career as a scrawny striker (can you even imagine?) for local Rome side Ostiamere, it was difficult to imagine the tattoo-sporting, bearded gladiator De Rossi would evolve into, like some sort of ill-fated Pokemon with hyper-extendable elbows and a penchant for flying into tackles with the intention of removing an opposition player from the field of play.

In the early days, De Rossi was regarded as somewhat of a precocious talent; a bright, mobile and creative midfielder who possessed a supreme engine to boot. After impressing on his Serie A debut in January 2003, he then went on to score in his first ever start for the club against Italian minnows Como.

A relatively minor blip on the radar of Italian football – a scene dominated at the beginning of the ‘00s by Totti, Maldini, Del Piero and Buffon – De Rossi slipped quietly into the Roma first-team fold following a string of assured performances in the 03/04 season. His calmness in possession, his box-to-box runs and his status as a local boy earned him the first of his many plaudits.

But by now, Batistuta had departed for Qatar, Emerson was soon on his way to Juventus, and the euphoria of winning the Scudetto in 2001 for the first time in twenty years had promptly faded.

With his ascension into the starting eleven, there were beginning whispers that an heir to Totti’s throne had finally arrived. A bit like Aragorn in the Lord of the Rings, except De Rossi wasn’t hanging around with four short fellas and an old man who smoked too much pipe-weed.

Over the next few seasons, the rambunctious playing style De Rossi became (in)famous for began to emerge as he consolidated his position as one of Italy’s fastest-rising stars. In the national side, he was overshadowed somewhat by the incumbent snapper-of-legs, Gennaro Gattuso, but the World Cup 2006 was a stage upon which De Rossi could stake his claim.

In what is largely considered a total mockery of the punishment system within football, De Rossi first made international headlines after he was duly sent off against the USA in their second group game for an intentional elbow on Brian McBride that Conor McGregor would’ve been proud of. Several stitches for McBride, a lot of blood and many gratuitous replays later, Fifa banned De Rossi for four games and fined him CHF 10,000 (£7,450). Of course, Italy reached the final, by which point De Rossi had served his ban, and helped his country win the tournament – even scoring his spot-kick in the shootout.

A great lesson to take home for all the kids watching: if you elbow someone in the face, don’t worry, you can still win a World Cup.

From this point on, De Rossi embraced the recognition as a genuine hard-man, having already changed his squad number with Roma from 4 (sensible choice for a defensive midfielder) to 16 in honour of his idol, Roy Keane. Simple logic dictates if your idol is a man widely regarded as the most violent footballer of the ‘90s, you’re definitely the kind of bloke that sharpens his studs before a game.

It became a “case of move over, Gennaro” as De Rossi became the heartbeat of the Roma midfield throughout the mid-to-late ‘00s and even shared duties with ‘Rino’ in a national side that now bristled with steel.

However, for a man versed exceptionally well in the dark arts (read: kicking people and getting away with it), De Rossi was – and still is – a truly intelligent and technically-gifted footballer. Able to deliver raking cross-field balls with either foot just as easily as deliver crunching tackles to over-ambitious show-ponies, De Rossi was arguably the premier holding midfielder in the world.

Much like Roy Keane, his earlier days were spent making the most of his youthful vigour rampaging from box-to-box, contributing to every phase of play as much as he could. In his twilight years, De Rossi developed into a true anchor man, diligently prowling in front of his back four, barking orders, cutting off passing lanes and distributing the ball to the more creative players further forward.

Just like Francesco Totti, chances to depart Rome in pursuit of silverware were not uncommon for De Rossi; Manchester United were reported to have sought his services for years. Yet, just like Totti, the call to play for his boyhood club always proved too great.

It became a familiar trend for De Rossi – much like for Totti – that his time at Roma would be spent largely being the “almost-rans”. Despite nearly two decades of service, De Rossi can claim only two Coppa Italia and a single Supercoppa Italiana winners’ medals to his name. In a bizarre statistic, De Rossi has an astounding eight runners-up medals, more than anyone else in Serie A history except for – you guessed it – Francesco Totti.

Then again, you try telling the man his career’s been a failure. If you value your legs intact, you’d best keep that one to yourself.

Eschewing the trophy-laden career that might have been, De Rossi instead carved himself a spot in Roman legend with his utter devotion to AS Roma. So much so that he waited until the ripe age of 34 – when most footballers are beginning to think about golden L.A. beaches or China – to assume captaincy of his club following the retirement of Totti, aged 40.

With fifteen-plus years of service to his name, the wizened old De Rossi will likely still be haunting the Stadio Olimpico long after Nainggolan and Manolas have jetted off in search of silverware.

And even if he can’t get in the team anymore, we can always remember Daniele De Rossi for this gem of a quote:

“When I see them [young footballers] do live Instagram videos from inside the locker room before a game, I’d like to take a baseball bat to their teeth.”